Inconvenience and detours come along with any road construction, and the 315/270 project is no exception. With that said, the north section of the Olentangy Trail is one of the busiest multi-use trails in the state, with a volume of over 700 users per day. Some of this traffic is discretionary and will taper off during the trail closure. But for a significant number of cyclists, this section of trail is a vital transportation corridor connecting the northern suburbs to Worthington, Clintonville, OSU and downtown.

This document outlines options to create a safe alternate route for trail traffic while the Olentangy Trail is closed under the 315/270 interchange.

The routes proposed will not only serve to keep bike traffic flowing safely during this construction but will create new connections between neighborhoods and the Olentangy Trail, providing valuable service well beyond the scope of the 315/270 project.

Wilson Bridge Road Option (marked in red): This is the recommended route. It’s both safe and cost effective.

161 / Olentangy River Road Option (marked in blue): While this route has benefits, and should be kept under consideration for long-term improvements, it has significant safety challenges. Improvements required for this route may be beyond the scope of the project.

Build trail spur from south side of skate park to a new bike and pedestrian entrance at the bottom of the hill on Wilson Bridge Road (‘A’ on map). Adding a new entrance has several advantages over using the existing park entrance:

Reduce lane width on Wilson Bridge Road from 12’ to 11’, making room for 4’ bike lanes. Add green paint to bike lanes along the curved sections to increase visibility and discourage cars from drifting into the bike lane (taking the “racing line”).

Ring up utility covers, bringing them up to even height with the road.

Add bike-friendly grids to the drainage grates on the bridge over 315, bringing them up to even height with the road. (‘G’ on map)

Cut back honeysuckle along inside of curve to improve sight lines. This will help eastbound cars see bikes turning into the lower park entrance. (‘B’ on map)

Add treatments to help bikes merge into the travel lane and make the left turn into the park (‘A’ on map). Suggested treatments are sharrows showing the left-turn movement and a sign along the eastbound lane indicating cars should yield to left-turning bikes. See image below.

Because of the high volume of traffic on Wilson Bridge, merging into the lane to turn left may be challenging, even with the above treatments. A left-turn refuge box should be added to give bikes a safe spot to wait if they are unable to make the turn. 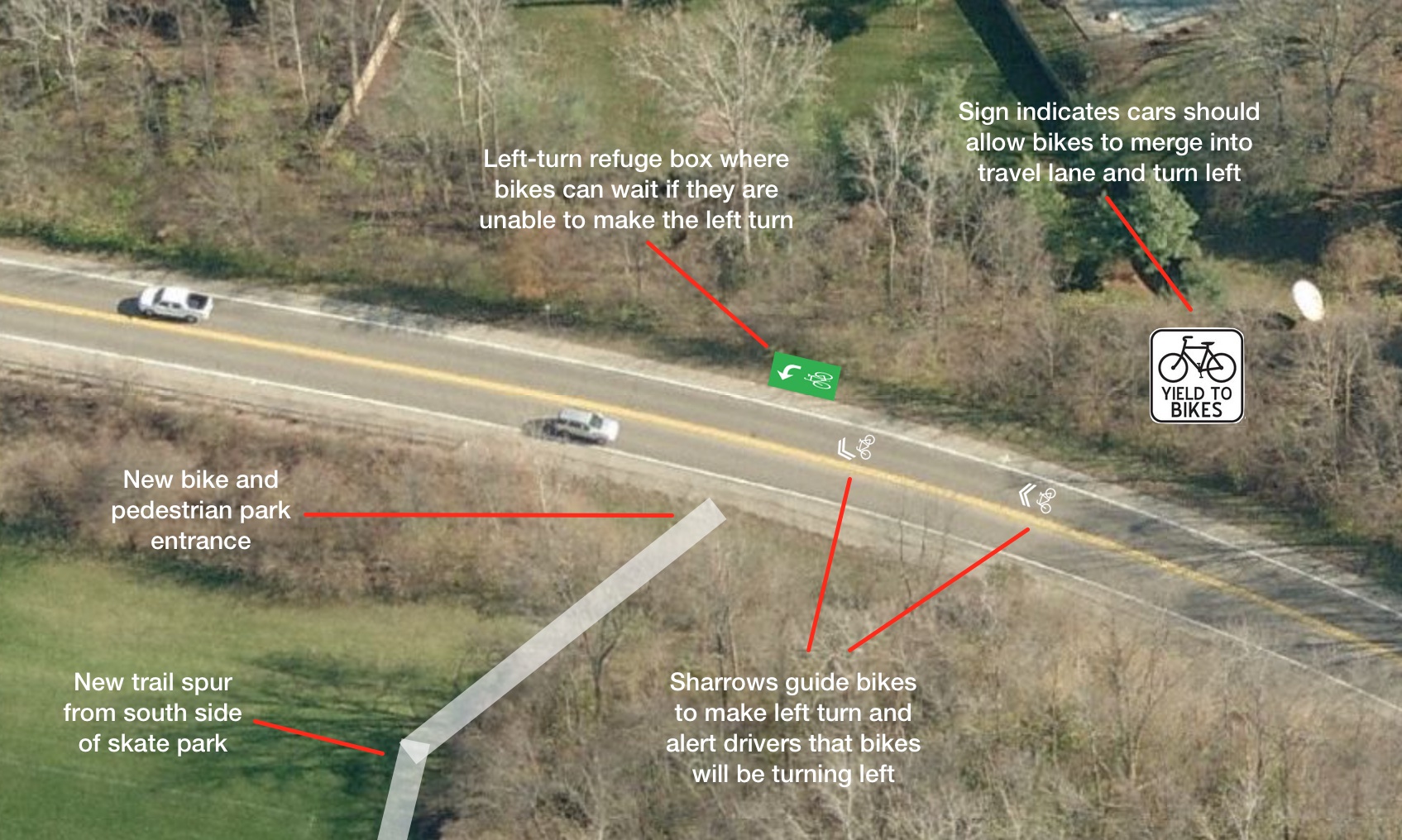 Pave shoulder and add bike lanes between Bluffway Dr. and Hard Road New pavement should be smooth with minimal seam between new and existing pavement.

Bike boxes allow bikes to move up to the front of stopped traffic during the red light cycle and get a head start into the intersection when the light turns green. (‘C’ on map) This reduces right hooks and other conflicts that occur when bikes and cars are mixed going into an intersection.

There is also an ongoing problem with cars passing and cutting off bikes to turn right on Hard Road from Linworth Road. Adding a 50ft section of green paint in the Linworth bike lane approaching the intersection may help highlight the presence of bikes. See image below.

Since bike boxes are fairly new in Columbus, an education campaign is recommended to teach cyclists and drivers how to use the bike boxes. 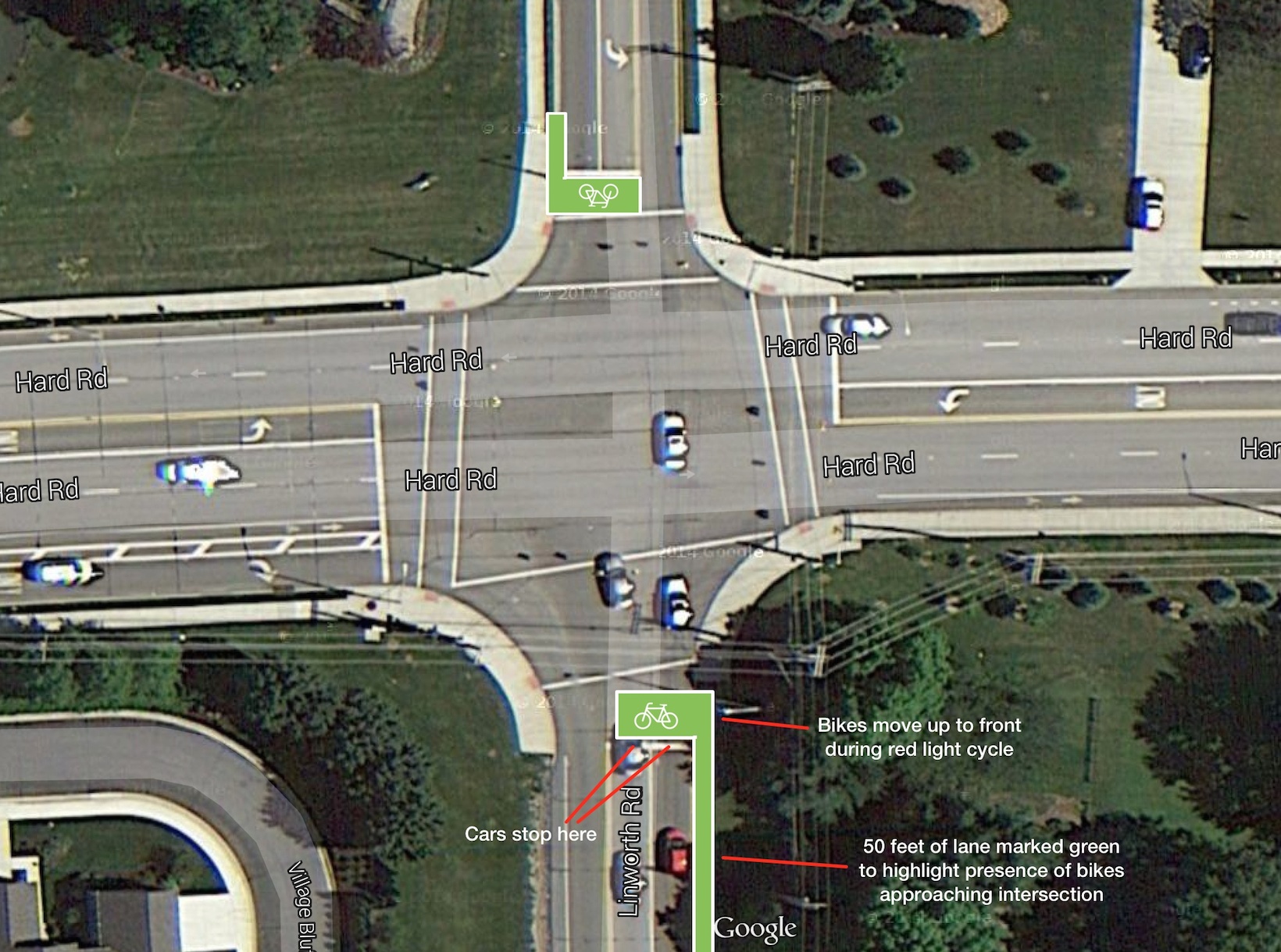 Add treatments to help bikes merge into the travel lane and make the left turn onto Linworth Road E. (‘D’ on map) One possibility is to add sharrows showing the left-turn movement and a sign along the southbound lane indicating cars should yield to left-turning bikes. See image below. Another possibility is to add a 4-way stop at the intersection. 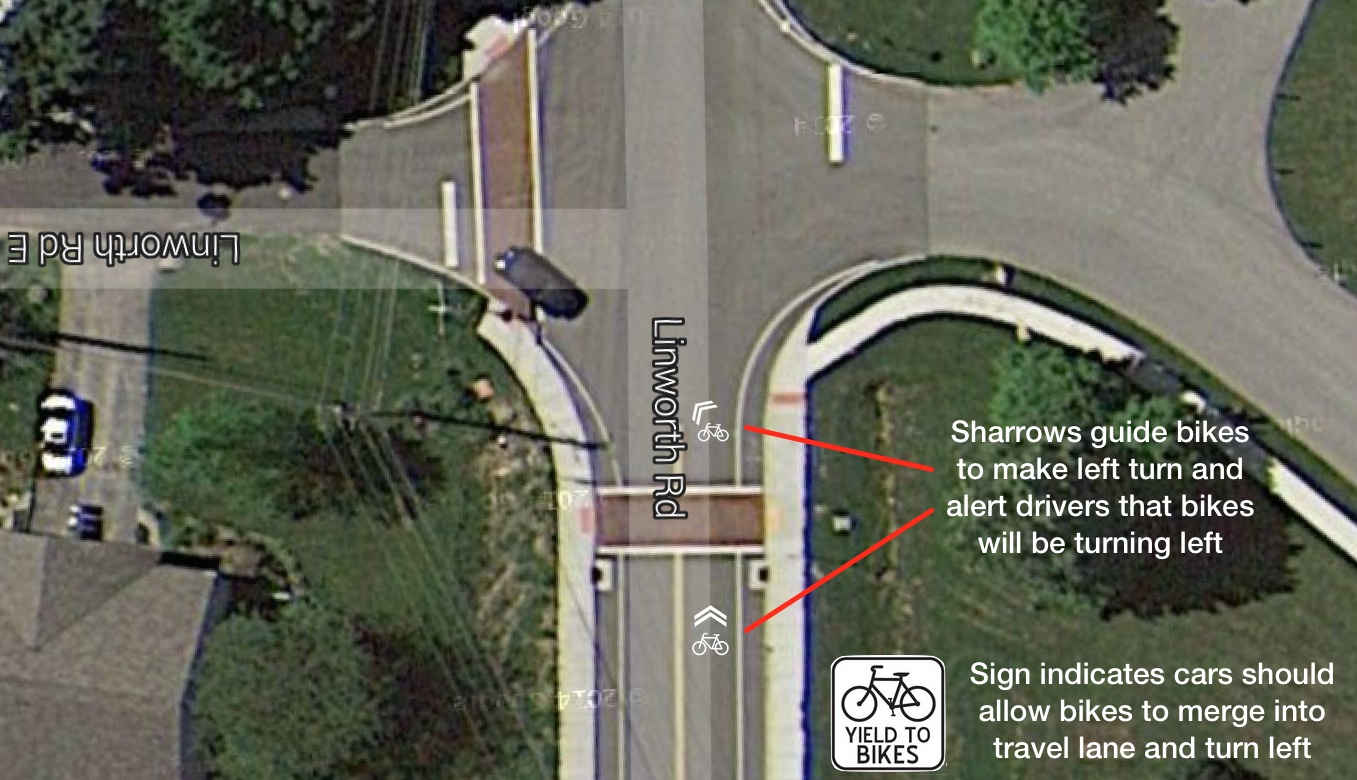 For the remainder of the route into Worthington Hills (Sefton Park Dr, Rutherglen Dr, Southview Dr, Clubview Blvd) add sharrows and signs indicating shared use road. Speed bumps may also be added in the future since there is a high volume of cut-through traffic along this route.

The second route option requires treatments along Olentangy River Road and State Route 161. Although this route is not recommended for the current project, it should be kept under consideration for a future project. For completeness the findings are documented below.

Adding sharrows to this section would probably not achieve a sufficient level of safety. There are limited places to pass along this section of road. Even if the speed limit were reduced from 45 mph to 35 mph, there would still be a significant speed difference between cars and bikes, creating pressure for cars to pass bikes where it’s not safe. 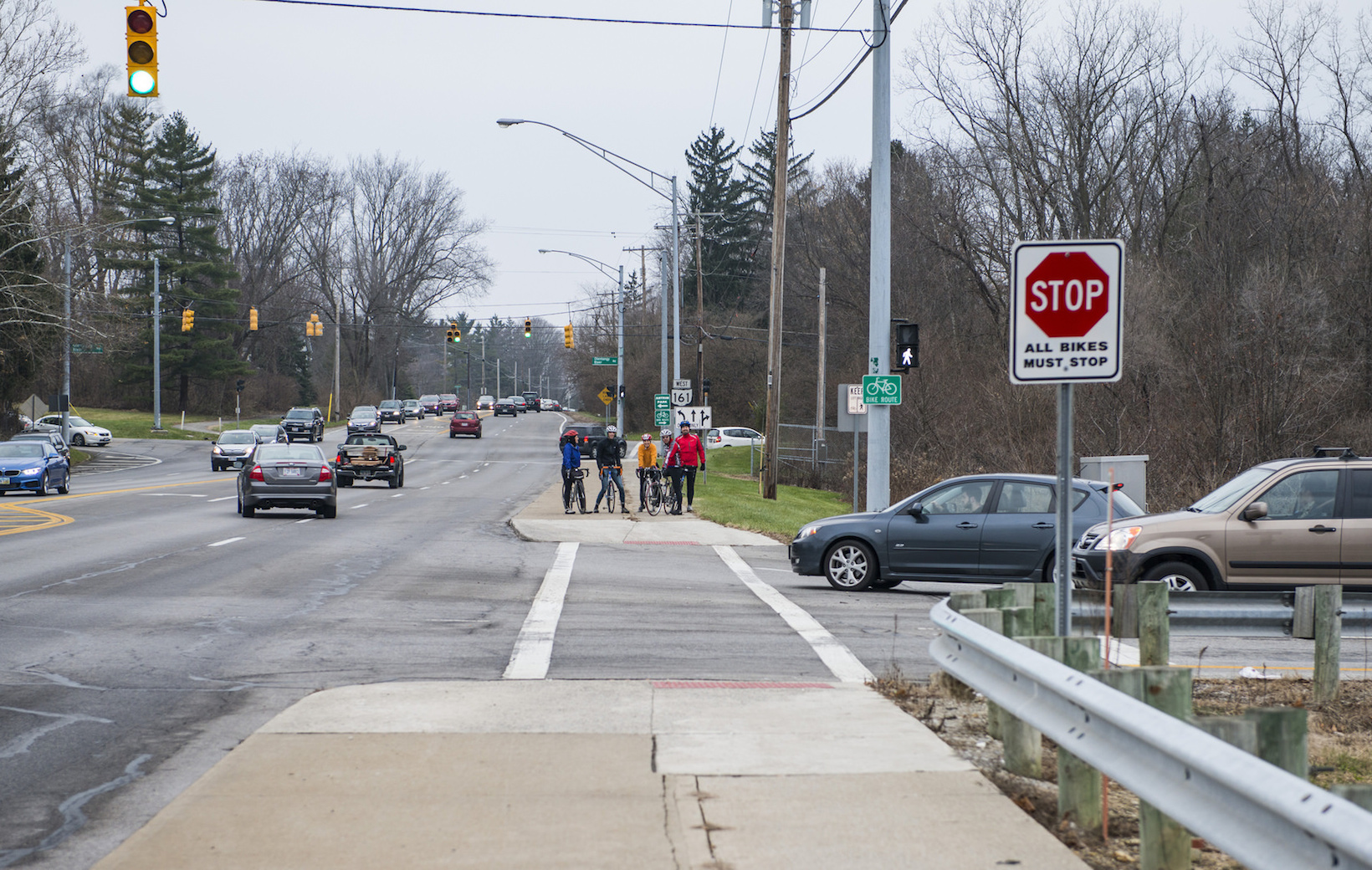 Adding “No right on red” would help significantly, but seems heavy-handed given current levels of bike traffic. Another possibility is to install a lighted “Caution bikes / No turn on red” sign that’s activated by the pedestrian crossing button. This sign could be supplemented with crossing treatment to raise awareness of the bike crossing. See image below for one possibility.

This entrance ramp has numerous problems. There are conflicts between bikes crossing the entrance ramp and cars turning onto the entrance ramp from both the right and the left. Drivers are focused on movement of other cars and often do not see bikes, especially contraflow bike traffic from the west. In addition the exit of the bike underpass is located partway down the entrance ramp with poor visibility and no safety zone to wait for a safe opportunity to cross. See photo below. (‘F’ on map) 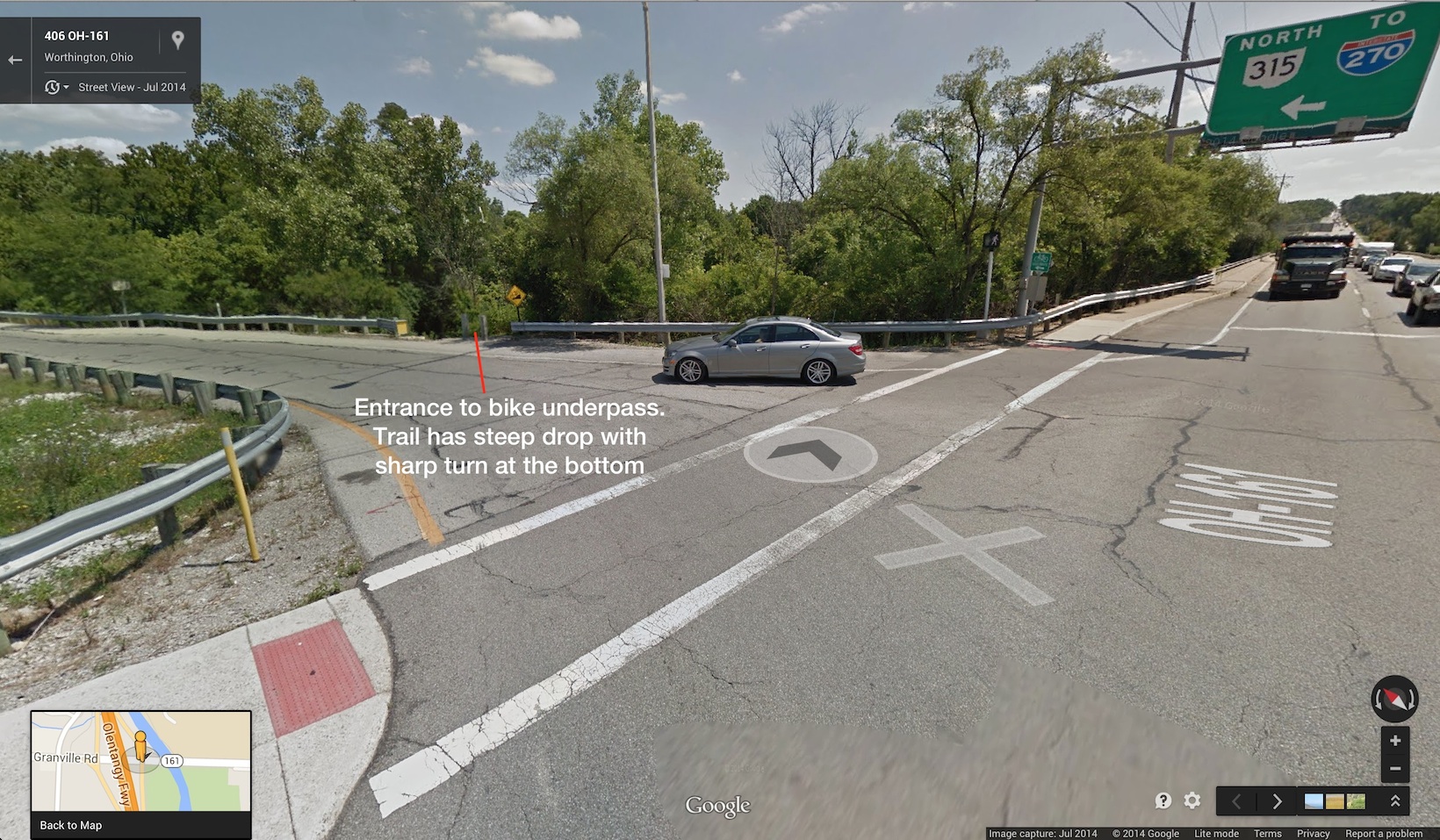 Similar designs are used in other cities. 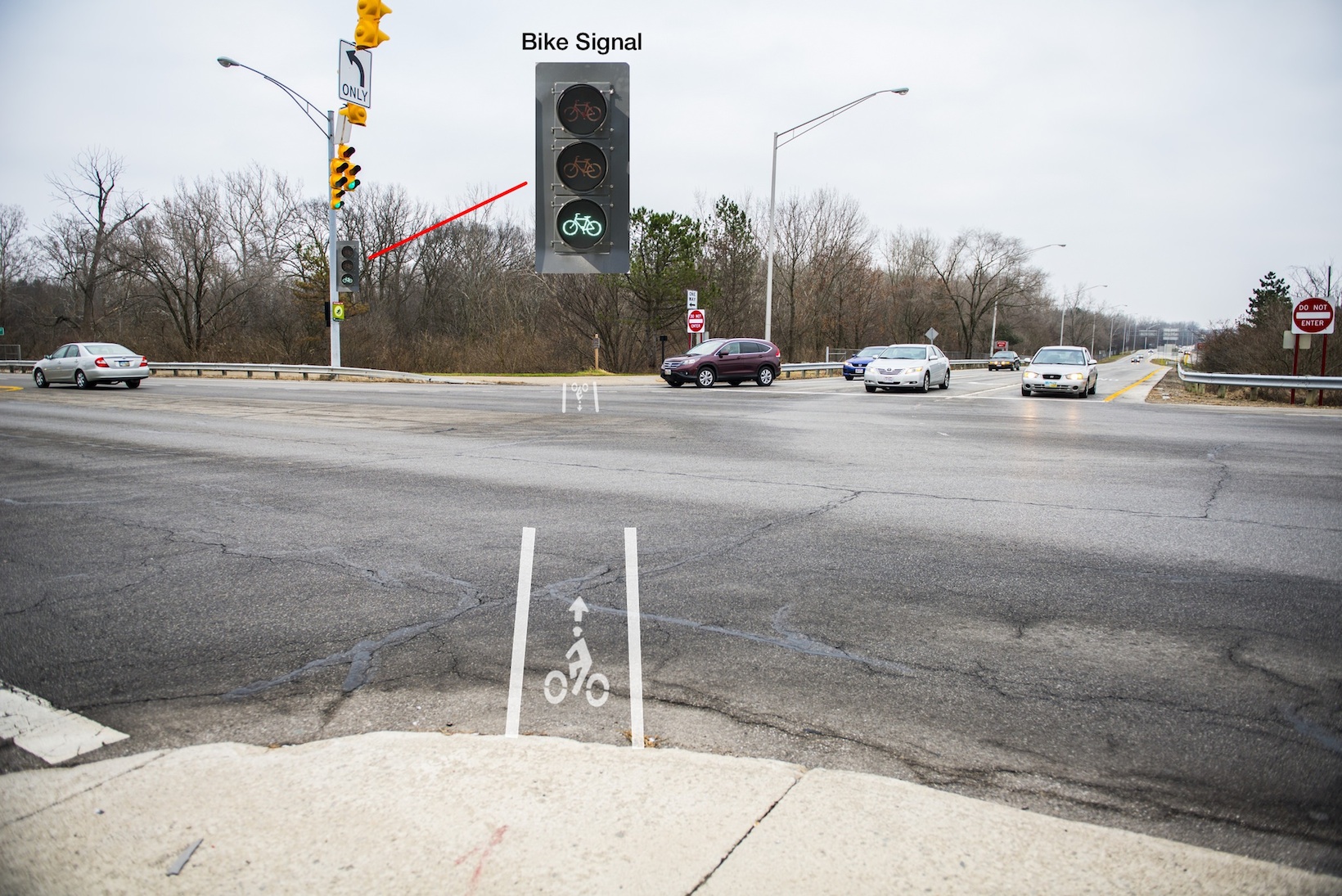 Differential settling has created seams along the line of travel. Sections of the sidewalk should be replaced to fix the seams.

Ideally a concrete safety wall should be added similar to the wall on the Olentangy Trail at Henderson Road. 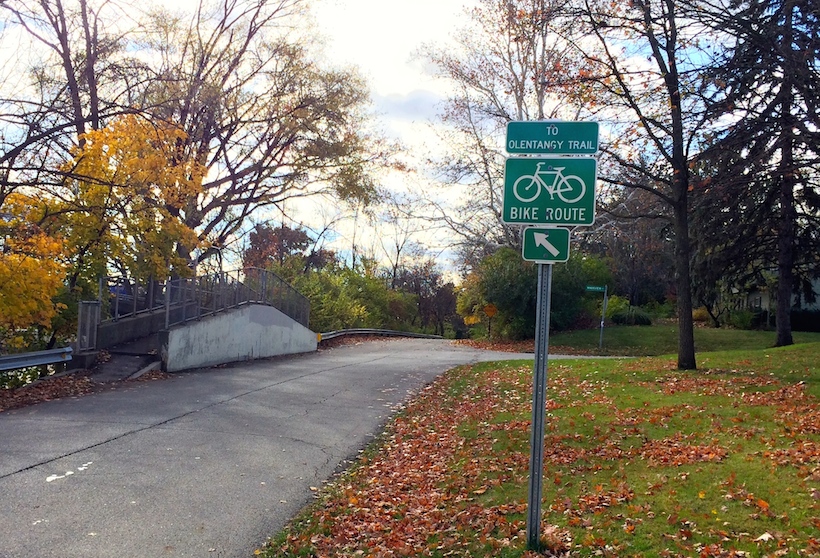 Bike tires are susceptible to punctures from road debris that builds up in bike lanes. As debris builds up, cyclists will start to avoid the bike lanes and ride in the travel lanes.

Bi-weekly sweeping is recommended to keep the bike lanes free of debris.

The recommendations in this document are the results of a reconnaissance ride and meeting on Dec 13, 2014 attended by ODOT representatives and cycling advocates. Thank you, ODOT, for helping us review the route options. Thank you, Rick Jordon, for taking photos of the ride.

ODOT is accepting public feedback on the trail closure through January 9th. If you like the recommendations in this document, or you have ideas of your own, contact Brian Davidson at ODOT: brian.davidson@dot.state.oh.us